THE EVENT DEDICATED TO SOUTH KOREAN CINEMA IS ABOUT TO BEGIN 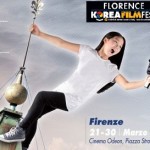 It will take place from March 21st to 30th at the Odeon movie theatre in Florence the twelfth edition of the Florence Korea Film Fest, the festival opens Primavera Orientale, an event dedicated to the Asian motion-pictures and organized by Fondazione Sistema Toscana.

The Florence Korea Film fest created and directed by Riccardo Gelli, and organized by Taekgukgi Toscana Korea Association, once again has a program full of films, guests and side events. For more than a week it’s gonna be a complete full immersion in South Korean cinema with 50 movies divided in five main sections: K-Fantastic, Orizzonti, Independent, Corto Corti and Notte Horror.

The opening film is Hide & Seek, a successful blockbuster in South Korea in 2013, that will be presented by its young director Huh Jung on March 21st, while the closing film will be Boomerang family directed by Song Hae-Sung who will introduce the screening.

Among the various guests present at the Festival, stands out the Asian star Choi Min-sik, one of the most popular actors from South Korea, internationally famous for his performances in Strokes of fire, Old boy and Lady Vengeance. Choi Min-sik will be in Florence to meet the audience and receive the award 12° Florence Korea Film Fest. For the first time in Italy, a retrospective will be dedicated to the actor, composed by 8 of the 25 films that he played in his long career, among them there are Failan in which he stars as gangster, Stroke of fires  the story of the Korean painter Jang Seung-up, Springtime where Choi Min-Sik is a ruined musician, Crying Fist the moving story of an ex- boxer and of course the cult movie Old boy.

Among novelties of this Festival’s edition there is the section K-fantastic, dedicated to fantasy, a very popular genre in South Korea that also includes science fiction and horror. K-Fantastic offers a selection of 9 films, among them stand out The Ginkgo Bed one of the biggest blockbusters of all time in South Korean cinema, Snowpiercer directed by the acclaimed director Bong Joon- ho and one of the first Korean movies shot in Europe, Siworae never released in Italy and whose remake with Keanu Reeves and Sandra Bullock was done in Hollywood, and also the blockbuster The Host.

Florence Korea Film Fest show also an example of the modern Korean cinema in the section Orizzonti, with six films all released in 2013, among which there are Moebius by Kim Ki-duk and Our Sunhi by Hong Sang Soo, while in the Independent section it presents a selection of movies less visible and far from the large films distribution.

Throughout the Festival the following awards will be given: 12° Florence Korea Film Fest, Kia Jury award, Public award, and Critics awards (to a movie selected from Orizzonti and Independent sections).

A selection of films presented at the Korea Film Fest will be shown in Rome, at Trevi cinema from 8th to 10th of April.