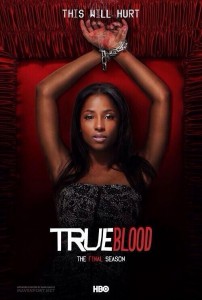 HBO released a trailer for the seventh and final season of True Blood, focuses on Sookie (Anna Paquin) and the residents of Bon temps. The home town of the vampires and the protagonist, is now lonely and violent, ruled by vampires infected by a strong virus and blood thirsty more than ever. At the end of season sixth, the show writers knew that in the seventh year the characters of True Blood would have been back to the beginning point of the story, in Bon Temps, Louisiana.

In the trailer an horrified Sookie cries out to her friends Sam, Alcide, Jason and Andy “there’s no one left Alcide, Jason ed Andy, revealing the situation of a city on the alert. Government of Lousiana seems to help the few people left among those wounded and dying, while the remaining residents in Bon Temps turn on one another.

After the announcement that True Blood was renewed for a seventh and final season, HBO President Michael Lombardo promised to fans “a fantastic final chapter of this amazing show. True Blood has been nothing short of a defining show for HBO.” Series creator Alan Ball added “I’m deeply grateful to HBO for being true partners and collaborators, and, of course, to the viewers who chose to spend Sunday nights in Bon Temps with us”.

Seventh Season of True Blood, that will consist of 10 episodes, will premiere on Sunday, June 22on HBO.