THE CRAFTSMAN, AWARDING EFFORT AND RESULTS: ALL IN STEAMPUNK STYLE 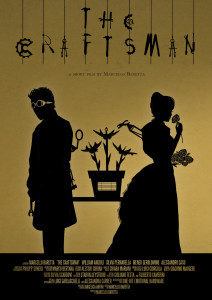 Marcello Baretta impresses and surprises with his first, wonderful project, called The Craftsman.
The steampunk fantasy shown to the viewers, introduces anachronistic technologies within a nineteenth century historical setting.
The craftsman, or rather the artisan, is a shy and careful person. He is very absorbed in his studies and works, but he is going to realize soon that beyond his workshop, there is life and above all love.

Played by William Angiuli and Silvia Pernarella, this short film, at the beginning born as a University project for an exam, is becoming a big network success. The product, fulfilled with private financial resources, is an unexpected gift. One scene in particular can be seen as a metaphor of the whole work. The craftsman creates, he makes an object that will be given as a gift.

Behind that gift there is commitment, exhaustion of mental capacities and sleepless nights. Alongside the steampunk artist there is an aristocrat who doesn’t create, but who simply makes others do so for him. While he allows others to dirty their hands for him, the Craftsman works.

Film 4 Life had the opportunity to meet the director who, during a brief but intense interview, revealed that: “I attended IULM, I studied for three years tv and new media Communication.
Now I am studying cinema (previously I graduated in cinema direction and production at IED) for the exam of direction we had to make a 5 minutes short film free topic, individually and with our financial resources. I decided to go beyond the quality required and/or appropriate for this kind of works, to expose my self, in order to overcome self-imposed challenges .I had a very narrow budget for the short film, however I was sure that I could do something scenic, with costumes and special effects.

Furthermore I aimed to an artistic product that mixed up shadow effects and live-action.

I was certain that I could do it with a good productive strategy. I tried to allot effectively the resources I had, first the financial ones, then the humans. I don’t know much of steampunk but when I was a boy I read Jules Verne. I tried to include something of his work and to rely on the fact that cinema didn’t use it too much. Even the steampunk, at least in Italy, seemed to me as an unexplored universe, fresh, full of creative ideas interesting to develop. I researched on themes and atmospheres, that we tried to recreate through lights and colours of objects, costumes, etc. I stepped back from the “real” steampunk here there is less punk, because in these comics everything is in the style of steampunk, while in the world I put on only the craftsman and his art are above the lines, the rest of the world is normal”.

On the relationship between directors and actors he adds: “…with the actors, that I met mainly through internet, there was a work of in-depth analysis and study of characters. Especially with the leading actor William Angioli, who came several time to my house, to exercise on sketching on industrial appearances, using works and projects by Leonardo Da Vinci, Carlo Rambaldi and Galileo Galilei, as inspiring source. This is a short film that exemplifies the prizewinning results of hard effort. In the end, only who makes an effort, wins, it doesn’t matter if mechanical flowers are more beautiful than the real ones, those who struggle to get good result, win.
I am pleased with my creation.