The event dedicated to the Japanese Cinema is back

WA! Japan Film Festival, unique event in Italy completely dedicated to the Japanese cinema, will take place in Florence from 8th to 11th of May at the Odeon movie theatre and for the first time in Milan, from 13th to 15th of May at the Auditorium San Fedele. The Festival, organized by the Cultural Association Tokaghe, is a young and popular movie event that aims to promote cultural interchange between Italy and Japan. Its fourth edition has a new format and comprises a program full of films, guests and side events. 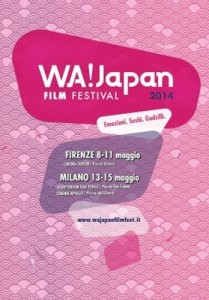 There are 15 movies in competition that propose different genres; comedy, drama, animation, with a specific attention for independent films and debuts. The program include also 19 short –films selected from Sapporo Short Fest and Japan Media Arts Festival, a Japanese event dedicated to multimedia arts, as animation, comics, contemporary art and videogames. Even this year the Festival has a twin town, to make known better Japanese cultural diversity and traditions, for the fourth edition there are two twin towns: Takaoka, famous for its production of metalwork and Kagoshima.

WA! Japan Film Festival has three different sections: Wa!Manga dedicated to screen adaptations of manga, among the movies selected stand out Soul Flower Train by Hiroshi Nishio and Lupin the 3rd vs Detective Conan: The movie by Hajime Kamegaki, where two important manga characters come across: the thief Lupin III drawn by Monkey Punch and the little detective Conan created by Gosho Aoyama. On the other hand section WA!Essai shows art movies as the touching The Little House by Yooji Yamada, in competition at recent Berlin Film Festival, and The Great Passage by Yuya Ishii, that represented Japan at the Academy Awards 2014.

WA! Pop is devoted to popular films as Gothic Lolita Battle Bear a mix by comedy and action-horror directed by Noboru Iguchi, Why don’t you play in Hell? by Sion Sono, presented at the last Venice film festival and Tamako in Moratorium, the new movie by Nobuhiro Yamashita. In Florence the opening film on Thursday 8th of May is Rokugatsudou no sanshimai by Kiyoshi Sasabe, it’s an international premiere and both the director and the leading actor Seishiro Nishida will be present at the screeing. In Milan there will be two world premieres Sweet poolside by Daigo Matsui and Yuto-kun ga Iku by Ryo Higuchi and Aya Otawa.

The traditional kimono parade, part of the side events, will pass through the streets of Florence on Thursday 8th of May beginning at 12:30 pm.