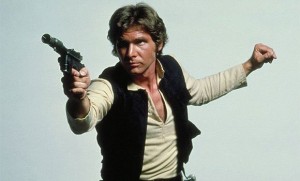 Worried about Harrison Ford. Last week the American actor hurt his ankle while he was filming a scene on the London set of the new Star Wars movie. According to what reported on Variety magazine, Ford was taken to a local hospital after he sustained an ankle injury. The news was confirmed by a spokesman for Disney, who however reassured all those who were already worrying and announced that “he was taken to the hospital and he is receiving care”.

Shooting didn’t start in the best way for 71 year- old actor, whose role in the film was very much requested and acclaimed by fans of Star Wars’s saga. Director J.J. Abrams faces the first obstacle on set, and who knows if this event will be the only first stop of filming. Star Wars: episodio VII – at this link the varied and complete cast of the movie – will be released on December 18th 2005.

Harrison Ford aka Han Solo, may the force be with you!