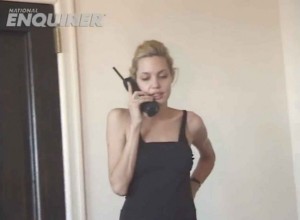 Worldwide famous actress, director, producer, Academy award winner, UNHCR Ambassador, mother and Brad Pitt’s bride to be, Angelina Jolie is a versatile artist who is able to make private and professional life match. This time however, she couldn’t control something shocking from her past as drug addict, revealed by the American tabloid The National Enquirer.

The 16 minute video footage shows an unrecognisable Angelina Jolie clearly under the influence of drugs, involved in a phone conversation, likely with her father Jon Voight, and talking about her mother. A messy and untidy apartment is in the background, the actress paces nervously, showing emaciated skin, slim figure, hair worn tied back in a chignon and bloodshot eyes.

The video infuriated Maleficent actress, who was thrown on the front page, even if the existence of this footage was already publicly known, because Jolie’s biographer, Andrew Morton, talked about it in 2010, mentioning the video by Franklin Meyer, ex drug dealer. He was the one who revealed to the American tabloid that he supplied the actress with any kind of drugs during the 90s.

“That day Jolie called me up because she needed her cocaine and heroin dose”, Meyer told The Enquirer, “I had just bought a video camera and decided to bring it along. While I was there she got a phone call. I carried on filming. She was a client of mine for several years. I provided her two or three times a week when she was in the city”.

This video released on front page certainly will not help Jolies’ reputation, especially because it shows her in a past that she often described as “the darkest time of my life, but I survived. For many reasons I shouldn’t be here now”. The past is over, and now Angelina Jolie is one of the most famous actress and one of the most respected humanitarian activist . Was it really necessary to broadcast this kind of video right now?