FINAL SEASON STARTED OFF WITH A SLAUGHTER AND A SHOCKING DEATH 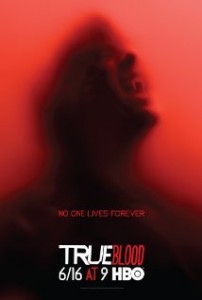 Final season of HBO show True Blood is just begun, telling for the last time the story and adventures of telepathic Sookie Stackhouse and her fellow citizens in Bon Temps. In the first episode “Jesus gonna be here” after a brief recap of the latest events, action starts where it ended in Season 6 finale: residents of Bon Temps must pair with healthy vampires to be protected, but this is not enough to save them. A group of vampires infected with Hep-V virus attack Bon Temps, many people are kidnapped, others died, among them Tara, Sookie’s best friend. She died so unexpectedly and off screen, that the only proof it really happened are a blood puddle and her mother Lettie Mae claiming that she has been murdered. Following the horrible slaughter everyone in town blames Sookie for what happened, considering her responsible because of her relationship with vampires.

While all this is happening in Bon temps, elsewhere Pam is still searching for Eric. She arrives in Morocco and after a thrilling vampire version of the Russian roulette she gets the information she needs to find her maker. The Russian roulette sequence and acid Pam’s lines made this is one of the best moment of the episode.

Jesus gonna be here started with a captivating action scene and an unexpected event: Tara’s death was so surprising that many fans of the show are still wondering if she’s really gone or not. Rutina Wesley, who plays Tara, confirmed in recent interviews that she died indeed, of course it doesn’t mean that Tara, who was in True Blood from the very beginning, will disappear from the show, likely she will be present somehow. Compare to the action-packed and thrilling first episode  the second one I found you was a little bit disconcerting.
It opened with that promised sex scene that True Blood fans were expecting to see: Jason’s dream on Eric. When at the end of season 6 Eric saved Jason by giving him his blood, he wished him to have good dreams and it finally happened. Then after a steamy  and hilarious scene between the two, the story goes back to Bon Temps.

After the brutal attack of the infected vampires, Sookie, Alcide, Jason, Sam and Andy leave Bon Temps and go in a nearby town to investigate and find out where Arlene, Nicole and Holly are kept prisoners. While they are gone, Bon Temps terrified citizens gather and lead by Vince, who lost mayoral elections and is resentful towards Sam and Andy, enter in the police station and take all the guns they can, to protect themselves. Meanwhile Tara’s mother Lettie Mae is having visions of her dead daughter, Jessica is still determined to protect Adilyn so she spend her nights out of Bellefleur’s mansion, Lafayette finds protection and a new friend in James, Jessica’s boyfriend.

The episode’s climax is it in the end, when Eric, the Viking vampire and one of the most loved characters of the show, makes his comeback and not as a dream this time. In season 6 finale we left him on the top of a Swedish mountain burning up and his destiny remained a mystery so far. He didn’t even appeared in the first episode of the new season so there were many speculations on what really happened to him. After a long search Pam finds him in France, but he appears to have been infected with Hep-V virus. It’s not clear how he survived on the mountain and got the infection. Well actually many things are not clear in True Blood so far, the key of the season is not plain to see, right now it’s still difficult to say where the story is headed, with so many characters, and storylines.

Before Season 7 started  Brian Buckner, showrunner of the series, promised fans to bring Sookie’s story to a close with heart, imagination and, of course, fun. Two episodes down, still eight to come, then True Blood will be over, there is still time for the plot to get better and do justice to those characters that made this tv show so loved and popular.