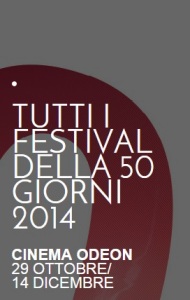 The eighth edition of the 50 giorni di cinema internazionale will takes place in Florence from the 29th of October to the 14th of December at the historical movie theater Cinema Odeon in Piazza Strozzi. The festival, organized by Fondazione Sistema Toscana in partnership with Regione Toscana, Comune di Firenze and Ente Cassa di Risparmio per Firenze, is composed by ten international festivals, that will come in quick succession without a break. The event will be opened on October 29th by the Festival dei Popoli that this year celebrates its fity-fifth anniversary, with the screening of two documentary films directed by two African directors and made at fifty-fifth years distance: Moi, un noir by Jean Rouch in 1959 and Examen d’Etat by Dieudo Hamadi in 2014.

The participation to the opening night is free and the public can collect the invitations at the Cinema Odeon (Piazza Strozzi) or in the offices of Mediateca Regionale FST (Via San Gallo 25) starting from October 20th. After the opening night, France Odeon, the festival of contemporary French films, will start off the 50 giorni di cinema internazionale. The sixth edition of the festival will takes place from the 30th of October to the 2nd of November and offers an event tribute to the remarkable French director Alain Resnais and a selection of the best French films. The 50 giorni di cinema goes on from the 3rd to the 5th of November with Immagini &Suoni del Mondo, Festa del Film etnomusicale at its seventh edition and it continues with the thirty-six edition of Festival Internazionale di Donne e cinema from the 6th to the 11th of November. The festival is structured in six evenings each one dedicated to films representative of six different nations.

Afterwards Schermo dell’arte film festival will take over, scheduled from the 12th to the 16th of November, it is the only Italian festival completely dedicated to the connection between contemporary art and films. From the 17th to the 20th of November there will be the Balkan Florence Express, organized by Oxfam Italy that shows a selection of movies coming from the Western Balkans area. LGBTIQ and Queer Culture films will be the main event from the 21st to the 27th of November with the Florence Queer Festival at its twelfth edition, that shows not only movies but also events connected with art, theater and literature. From the 28th of November to the 5th of December there will be 55° Festival dei Popoli where the best international documentary films are shown.

On December 14th the award N.I.C.E Città di Firenze 2014 brings the 50 Giorni di cinema to an end. It is the unique Italian date of the N.I.C.E. USA 2014 final leg of the international tour that every year the festival does to promote the rising Italian films in the world. After the success and the excellent results achieved in the previous edition, the 50 giorni di cinema internazionale comes back with a various and high-quality program destined to appeal all film enthusiasts.