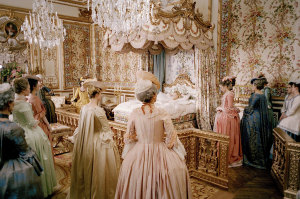 Certainly there is no need of a film to make known the places that disclose the history of Marie Antoniette, but if it’s a provocative director as Sofia Coppola who tells those events, well even Paris can become more intriguing than usual. The movie directed in 2006 by Sofia Coppola with a honey blonde Kirsten Dunst as the French Queen, was mainly shot in Versailles, the official residence of the French royal family from1682 to 1790, thanks to a special permission granted by the government.

Speaking of the Parisian Palace it’s impossible don’t mention the astonishing Hall of Mirrors, where the scene of Marie Antoinette and Louis XVI wedding ceremony takes places. This was an extraordinary concession, because during the shooting the hall was in restoration, waiting to be reopened to the public the following year. The set of the wedding ceremony between the two young newlyweds was filmed in the Chapelle Royale. From the balcony on the Cour de Marbre the Queen sees the tragic attack to the Palace of the uprising population, an event better renowned as the October March on 1789.

It’s surprising that the famous scene of the first traumatic awakening of the new Queen was not shot in the authentic Marie Antoinette’s bedroom in Versailles, but instead in a room of the Chateau de Millemont at 45km from Paris, and skilfully recreated by the crew of Sofia Coppola. Even the locations set inside the Petite Trianon, a building donated to the Queen by her husband King Louis XVI, are not authentic but reproduced in a studio.

The scene on location of the Petit Trianon were shot in the real places, an authenticity that can be found in the peaceful look of the protagonist while she meets her friend in the well-finished gardens or she has good time with her daughter. The shooting of the masked ball, didn’t took place at the Paris Opera, as it could look like, but at the Garnier Opera, a theatre with 1.979 seats that was opened in 1875 when Marie Antoinette was already dead. Other buildings are shown on screen, as the castle of Vaux le Vicomte, well-known for its gardens and chosen for some scenes on location.

The film was shot non only in Paris, but also between England and Austria, the crew filmed some of the scenes set in the French capital at the Belvedere in Vienna, a building complex that recalls the style of Versailles. A little of Baroque style is present too and with its brightness it has somehow influenced the nature of the film itself.