IN FLORENCE THE EVENT DEDICATED TO THE RECENT INTERNATIONAL LGTB FILM 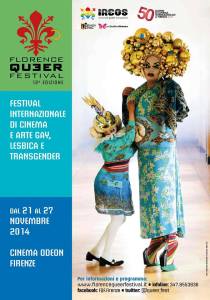 It twill take place from the 21st to the 27th of November at the Odeon movie theatre in Florence, the twelfth edition of the Florence Queer Festival, section of the film event 50 giorni di cinema internazionale a Firenze. The festival, directed by Bruno Casini and Roberta Vannucci, is organized by Associazione Ireos – Centro Servizi Autogestiti per la Comunità Queer of Firenze, in partenership with Arcilesbica Firenze and Music Pool, supported by Fondazione Sistema Toscana – Mediateca Regionale and Comune di Firenze. The twelfth edition offers a rich program with 30 films (15 of them in competition), two contests for short films (Videoqueer and Se hai testa fai il test) and a retrospective dedicated to the director Eytan Fox. Furthermore starting from this edition of the festival there will be a competition for best movies.

The opening film is Cupcakes by Eytan Fox, an extravagant and entertaining comedy with the music of Babydaddy (Scissor Sisters), that tells the story of a group of friends in Tel Aviv selected to represent Israel at the Eurovision Song Contest. The Israeli director and the drag performer Cybercissy will be presents to introduce the film. On the 27th of November, during the closing evening, winners of the film competition and the contest for short films, will be awarded. The ceremony will be followed by the screening of Helicopter Mum by Salomé Breziner. It is the story of a loving but also intrusive mother, played by Nia Vardalos (actress in “My big fat Greek wedding”) and her teenager son Lloyd, uncertain on his sexual identity.

Among the several films presented at the Festival, stand out Der Kreis – The Circle by Stefan Haupt, that already won last Berlinale and LGTV festival in Torino and is about the magazine established in Zurich in the fifties, Pierrot Lunaire, the last work of the Canadian director Bruce LaBruce, Global Gay the next frontier in human rights by Frédéric Martel and Rémi Lainé, a documentary on the organization for gay community’s rights and it is told by some brave activists. The schedule includes also One Zero One by Tim Lienhard, a mix between film and live performance about the lives of drag Cybersissy and BayBjane, Giò Stajano.

Siamo tutti figli di Dio by Luigi Caiffa, about Giò Stajano, the first homosexual to make coming out in Italy and a gay symbol, who died in 2011. A documentary about the iconoclast writer Violette Leduc by Esther Hoffenberg, a tribute to freedom and the charm of words. Among documentaries should be mentioned two that are about the delicate topic of elderly LGBT : Rebel Menopause by Adele Tulli, a portrait of the feminist Thérèse Clerc that tells about the project of co-housing over ’65 in France and Welcome home by Silvia Maggi, on the first LGBT elderly community in Germany.

The 20th of Novembre is celebrated the TDOR-Transgender Day of Remembrance, and the Florence Queer Festival presents three films that tell stories about transgender. Purple Skies by Sridhar Rangayan: Boy Meets Girl by Eric Schaeffer, and the documentary Favolose: storie in passerella! by Luca Oliviero. On Wednesday 26th of November, the program of the Festival includes also an event in collaboration with Robert F. Kennedy Center for Justice and Human Rights Europe and dedicated to the human rights theme, when three films about equality and dignity for LGTB community will be shown.