Rouge is a short film about two party girls, Sarah and Kelly that go out clubbing. During the night they have a conversation in the restroom that turns into an argument about men. David (Sarah’s boyfriend) is actually in one of the stalls making out with another girl and becomes privy to their conversation. Rouge recently won the prestigious Award of Merit at The Indie Fest (La Jolla, CA). But who is behind the movie? We met the director Marta Carracedo and she start speaking with us about her most famous work. 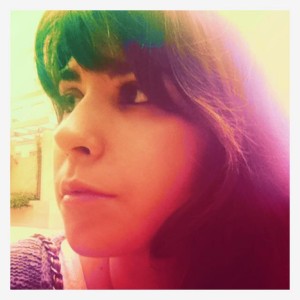 1. How was in your career to become director and producer as well?

It was hard. Well it is hard, because I would say that I’m still in the process to become one. I studied Communications and Mass Media in Spain. Then my first project was producing a feature film there. After that I decided I wanted to continue studying, so I moved to Los Angeles almost three years ago and I studied Directing at UCLA Extension. During this period of time I have participated in more than 20 short films focusing in producing and directing, and sometimes in other capacities like lighting, camera, art direction, etc.

2. Shooting in Los Angeles, so much different from Spain?

Yes, there are a lot of differences. In Los Angeles, everything is more expensive to start with, like getting a permit. And of course, you want to use the city and film outside because you are in LA, but money is always in the way. What I found good is that some people are very helpful, especially when you are crewing up. A lot of people will give their time for free, including actors. Like in Rouge almost everybody helped out for free. Also shooting in another language is a whole new experience, but what I liked for example in the Rouge crew was that everybody was from everywhere in the world and we tried to understand each other and make a great film at the end of it.

3. You worked with italians in your crew, how were they on set?

As I mentioned, the crew in Rouge was formed with people from all around the globe, and of course there were Italians! Two of the actresses were Italian and they also happened to be close friends of mine. Working with them was very easy and a truly enjoyable experience. I’ve worked with Italians in other productions too. In fact one of the first films I directed in LA was with the Italian actress Alessia Patregnani. I have also had great experiences working with the Italian cinematographer Pietro Torrisi, whose style and eye I absolutely love. I hope to have many more projects with them in the future.

4. Tell us more about the development of a movie from a production sight. How did it work?

Once the script is locked, everything is about planning. The first phase is preproduction where all the things need be prepared to make the story come through. It’s about scouting locations, doing casting, budgeting, preparing permits, insurance, renting equipment, scheduling, etc. If this phase is well organized, then the next one, the actual production (shooting of the film) will go without any problem. I’ve found that many times on some sets everything was very disorganize because people didn’t prepare with their teams in preproduction. For example, in the case of Rouge we had a two months period just for this phase to make sure we were ready. Finally, the last part will be the postproduction where the editing, color correction, music, sound mixing, etc. will happen. So at the end, the work of the producer during the development of a movie is making things easier for the director.

5. What’s gonna be in your future plans?

Right now, I’ve just finished shooting a music video that I directed and produced. The song is called “Come into my room” and the artist is Indian. I’m going to produce a second video of another of his songs at the end of July, and this one will go on MTV India and Google will promote it through YouTube. I’m excited about it! Apart from this I’m writing a script for a feature film that is a comedy and I’m working to finish it by the end of the year.