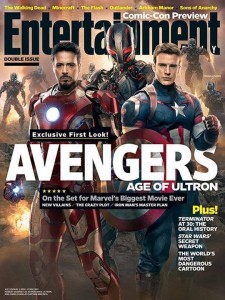 The promotional campaign of The Avengers – Age of Ultron goes ahead at full speed. The second chapter of Marvel franchise, directed once again by the amazing Joss Whedon, will be release in movie theaters only in the next year (likely in Summer 2015), still from now it proves to be one of the most expected films of the next movie season.

A proof is that Entertainment Weekly, the worldwide most famous American magazine, dedicates to The Avengers phenomenon a wide section. As it happened with the weekly magazine Tv Guide that dedicated six different covers to the world of tv series, Entertainment Weekly didn’t fall behind. If on the cover Iron Man stands out with the good and handsome Captain America and behind their backs there is the threatening Ultron, on web many picture stolen from set are leaking out.

There is something to suit all tastes: we see Black Widow ready to draw her gun, Thor and Captain America with a concerned look, Hawkeye (who is supposed to be more present) is busy running in a forest, without forgetting Mark Ruffalo and Robert Downey Jr and the new entries Aaron Taylor-Johnson and Elisabeth Olsen.

It’s still unclear Ultron’s look, who, as all we know, will be the number one enemy of the Avengers and will be played by James Spader (who right now is in the cast of The Blacklist). Thanks to the news leaked from Entertainement Weekly we know the real purpose of Ultron; he wants peace and to get it he wants to eliminate all those who are responsible of his destruction. The magazine confirms that Ultron comes from the “Iron Legion” of Tony Stark, a team robot he is using to fight crime while he is absent.

A lot of material then for The Avengers sequel, that is already a cult before being released in movie theaters.